I remember Sunday dinners with my grandparents like it was yesterday. The table was small, yet always packed with food. It was like a game of Tetris, sliding dishes around so that your dinner plate would fit on to the table. One of the dishes I remember fondly is cinnamon apple rings. Bright red in color, the rings were placed upon what seemed to be the whitest dish you had ever laid your eyes on.

As years passed, I grew and held Sunday dinners of my own and frequented others with family and friends and I would find myself thinking about those beautifully colored rings. Finally, I decided to rummage through my old cedar chest and see if I could find my grandmother’s old recipe for cinnamon apple rings. Searching without much hope of finding the recipe, I picked up an old Vogue magazine from 1956 in the back of the chest, and out it fell.

Below I have provided my grandmother’s recipe for cinnamon apple rings with the only change being red food coloring. I’ll always remember the time our dog ate the whole platter and got terribly sick. Instead of enjoying a nice Sunday meal together we had to make an emergency visit to the vet. Fortunately she pulled through, but this tragic event and the resulting medical bill is what led me to carry dog insurance going forward. It definitely would have been better if she had filled up on some oat and peanut butter dog treats instead!

My grandmother liked to use beets because that’s how my great grandmother did it. However, as my mother grew up and started preparing the recipe, she showed my grandmother that food coloring would make the rings brighter and redder.

In a small pot put all ingredients in, except for the apples, and bring to a boil. Once boiling, reduce heat and simmer with the lid on for about 5 minutes. While waiting, core, peel, and slice apples. Slices should be about a quarter-inch thick. Cook half of the rings at a time in the pot. Simmer until tender but firm. This takes about 3 to 5 minutes.

Place apple rings, with their liquid, in a bowl or jar that can be covered. Next, place in the refrigerator for one week. These apple rings can be served cold as a side dish, appetizer, or topping.

My grandmother always served these with poultry or pork dishes. I like to serve them now at Thanksgiving in place of cranberry slices. Also, when I was a child it was common to see my grandfather fix a bowl of ice cream and plop a couple on top after dinner. Although these can be canned, my grandmother loved doing it this way because she said it was quick and easy, especially during the holidays.

As I noted above, the coloring was something my grandmother originally achieved with beet juice. For me, I love the bright red color the food coloring gives the apples. The apples will absorb the liquid throughout the week and become lighter in color, so you can always add more food coloring to the syrup to brighten them up. If you have kids, it’s always fun to color the apples a different color like green or blue.

Whether for Sunday dinner or any night of the week, this nostalgic recipe will be a hit with family and friends. If you would like to give these cinnamon apple rings as a gift, I would suggest the canning method, so that they last longer and do not have to be refrigerated. Simply place rings in jars and either add cloth to lids or tie-up with ribbon and hand it out at the holidays.

There is nothing better than a wonderful, homemade blueberry pie. Most people don’t attempt pies because they feel daunted by them, but they’re simple when you come right down to it. Here, we’ll go over both the pie crust recipe and the filling, so you’ll have everything you need, including notes.

Make two batches, so you’ll have a top crust as well. You can get as fancy as you want.

You can use frozen blueberries since the peak of freshness is sometime in late summer. Simply thaw them and pick out any unsightly ones.

And there you have it, a fresh pie made by you, from crust to crimping. If this was your first time making a pie, just know that it gets easier as you do it more. And of course, remember that the important thing is that it tastes delicious. Whether it’s a gift for someone or a gift for yourself, you’ve done great! 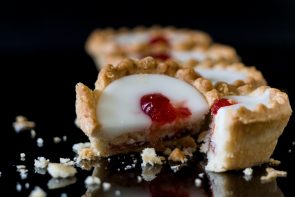